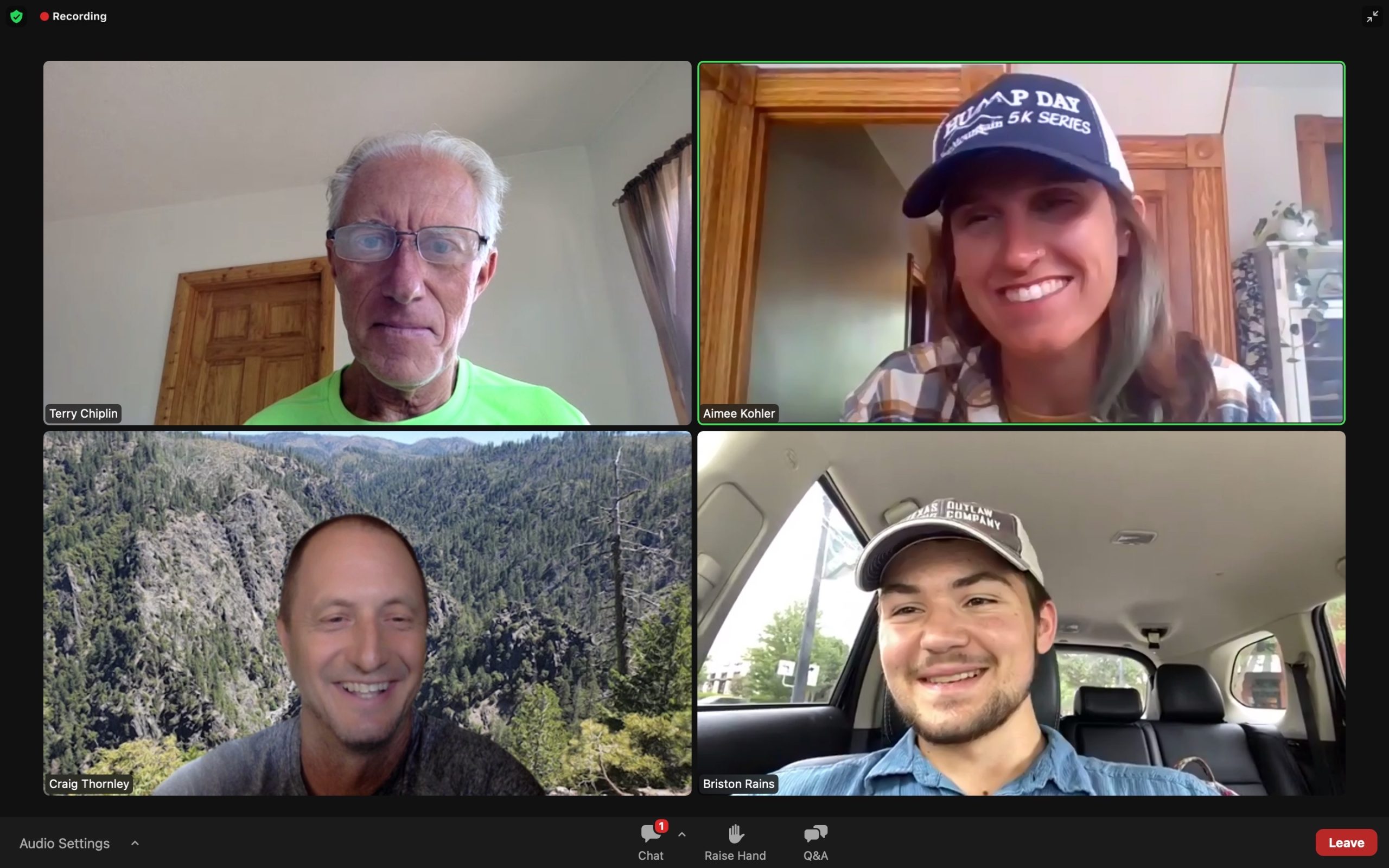 Starting Out was the subject for the seventh webinar in an eight-webinar series geared to race directors, produced by the US Trail Running Conference and presented by Marathon Printing, live on Thursday, July 21. The webinar series is held in partnership with the American Trail Running Association.

This webinar featured panelists who recently embarked on careers directing races, as well as one seasoned campaigner. The panelists were Aimee Kohler, who is an RD for Spartan Trail, and trail races at Blue Mountain Resort in Palmerton, PA. After the 2021 US Trail Running Conference Kohler set up a consultancy to help move the sport to zero carbon, The Running Kind.  The second panelist, Briston Rains, set up the Texas Outlaw Running Company after the 2020 US Trail Running Conference. The final panelist was Craig Thornley, RD for Western States 100 Endurance Run, and the Waldo 100k Trail Run. Panelists were asked to share key factors that they wish they had known when they first started directing endurance events. 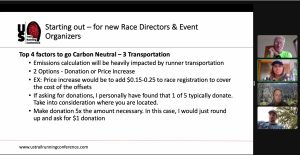 Kohler opened by sharing her top 4 factors to produce carbon neutral trail races.  The first factor shared calculators that she had used for her own races, and gave examples of how she assessed her own carbon emissions and then included the cost to recover this within the registrations associated with each race. The second factor was materials. Kohler disclosed that she uses reusable fiberglass marking stakes, biodegradable tape, has every race cupless and uses coolers to refill for water at aid stations. She also uses four bins at races, for trash, compost, recycle and TerraCycle. “I also make sure that the sponsors that I am partnering with have environmental policies and sustainable procedures put into place, so that I know our values align.”

Third on the list was transport, and the steps Kohler took to calculate the emissions amounts for races that she directs. Factor 4 was non-profit organization partnerships. Here she shared that she has been working with Soles4Souls for a shoe drive partnership, Human-I-T.org for an electronics recycle drive, and Animal Shelter for a blanket donation drive. “Finding new use for used items has a negative carbon footprint in most cases. It’s great peace of mind if you are working with donations and how this is going to look, especially if it’s your first time.” 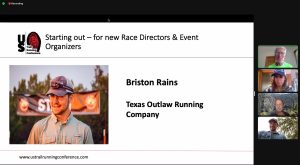 Rains introduced himself by saying, “I started race directing when I was 18 years old, and I’ve directed 11 events over the last 2 years. A lot of the races are what I call ‘bootstrap race directing’ where you pull yourself up by your own bootstrap, creating your own brand or race, literally from nothing. That’s the artistic side of race directing, you’re often creating something from nothing.”

The first of five tips that Rains shared was the importance of having an event planning document. “I had this crazy idea of putting on the hardest marathon race in Texas…a colleague handed me an event planning document when I met with him, and it had all these things that I would have never thought of in planning a race. That document has helped me to plan every race since then, providing information for every communication, website planning, etc.”

The second tip introduced by Rains was being realistic with the infrastructure available. “I started with zero dollars, building from the ground up. My first three races helped to provide money for tents, etc. You can’t put on a 100 mile race and go to Walmart and buy a few tents. You also need the support infrastructure as well. I still want to put on a 100 mile race in Texas, but I have to wait until I have all the supplies that will support a race of that length and size.”

The third tip shared by Rains was event site planning. “This tool is really useful with permitting authorities, as well as volunteers and the runners themselves.” The fourth tip was using particular aid station food. “For a small race like a 5k I provide bananas. For a 50k then I have learned to provide something that everyone will like and enjoy. Then for longer races like a 100k or a 100 miler, you have to include cooked food, plan to go really big on the food. One particular runner told me that we didn’t have Mountain Dew at one of the races – I now provide Mountain Dew at every single longer race, even if people don’t drink it….You really have to get out of the mindset of what you would like, and into the mindset of what all the other runners are going to like. You need to have a very wide selection of food.”

The final and fifth tip was to plan aid stations. “I learned this the very hard way. One of the first ever trail races I put on, a 50k in NW Texas, and I hadn’t actually been there – I was in college, and so I hadn’t visited the state park before the race was on. The only way to get to this place where I could put this aid station was to drive. So I get there at the end of this long dirt road and there’s a gate, and the gate is locked. There’s where you have to bootstrap and toughen up as race directors to make it happen. If there’s an aid station there, and you’ve told people there’s going to be an aid station there, you make it happen. So the day before the race we hiked tables, coolers, up the trail, you have to do what you have to do. So we made it happen. When you’re planning aid stations, think through those things, and be prepared to do whatever it takes to make the event happen.” 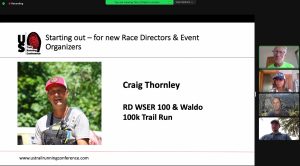 Craig Thornley was the final panelist for the webinar, and opened by sharing how he felt about the content from the first two panelists in the session. “Wow, Briston, you are so inspiring! I cannot believe you started when you were 18 years old, I am just blown away by that! That is so awesome! I am a little older than both of you…I started Waldo 21 years ago, and I had no experience with race directing. It was quite an undertaking to put on a 100k race in a figure 8 type layout. Then 12 or 13 years after that I got the Western States job.”

Thornley’s first of four factors, was based on this: “Don’t assume your volunteers know what you know.” He went on to share a story of something that happened early in his tenure as RD at Waldo. “We gave potatoes and salt to the captains of the aid stations, assuming they would be cooked. Then we received feedback post race that the potatoes at one of the aid stations were not cooked. It turned out the aid station captain at that aid station did not know that you were supposed to cook the potatoes before you put them out at the station. Then we had a message come in that a runner was dropping out at this point, and then that the runner was carrying on….we made the mistake of assuming that everyone knew what a DNF was!”

Thornley’s second factor admittedly was, “Kind of embarrassing.” He acknowledged that he took 4 or 5 years to change to ordering women’s shirts for the Waldo 100k trail run. “Why did it take me so many years to appreciate that women really do want women’s shirts?”

His third factor was the ‘intricacies of trail access and trail ownership.’ “We have recently had some issues with Western States regarding private land ownership. A very useful tool has recently become available, you can get the private land layer on Caltopo or the Gaia app. For $39 per year you can see all the private landowners, and who owns the land. I discovered that Western States, a race that has been going on for a good many years, passes through more private land than I ever knew….There are also a lot of issues with public land ownership, and don’t take these things for granted.”

Thornley’s fourth and final factor was ‘managing sponsor relationships.’ He shared that he “has two very different races, from Waldo that has a total budget of $30k, and Western States that has a budget of nearly $1 million. Some of the sponsor challenges are the same. I wished I had known how much time managing sponsorship relationships actually takes. From the beginning it would have been good to have a sponsor deck that gave consistency to sponsor relationships. I encourage you to get longer term contracts with your sponsors. Three to five year agreements are preferable.”

Then Thornley went on to share: “We had a livestream contract this year for Western States that was around $100k total budget. Brands typically allocate sponsorship funds at the beginning of their fiscal year, and you can’t go back and say, hey, can I get another $x 000 from you. But they do have advertising money that they can throw at you in a heartbeat, and this blew me away. I had no idea that there were different pools of money for these things.” 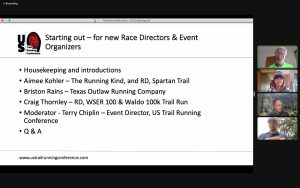 The three panelists closed out the session sharing their highlights of what they had each learned from the US Trail Running Conference.  Kohler shared that she decided to start “The Running Kind” following conversations at the 2021 Conference, and that those conversations confirmed that she was on the correct track in terms of following her passions.

Rains shared that in the first year he attended the Conference he learned basic foundational things for creating races, like which software to use. Then in second year, he learned more about sustainability, and to be more environmentally friendly.

Thornley also shared that the most important factor for him has been the “networking opportunities, meeting people like Dale Garland and Keith Peters. The content is great too, and I am energized by the younger people, like Aimee and Briston, that are coming through into the sport.”

Each webinar is presented by industry leaders in their respective fields, and offers  information that can boost a race director’s knowledge and afford insight into innovative practices to implement at their events. Every participant receives a slide deck with step-by-step information that includes best practices from the expert presenters. There will also be an opportunity to follow up on deliverables in-person at the 2022 US Trail Running Conference to be held October 19-22, in  Mukilteo, Washington.

The next webinar is titled: Maximizing Sponsor Revenue with Partnerships, and takes place on Thursday August 25, 2022, at 11.00 am to 12.00 pm MST. Panelists are Susan Kendrick, Director of Brand Relationships with Ultrasignup, Melissa Cooney from Eventhub, and Michael Bleau, also from Eventhub.
The session is sponsored by Eventhub, a partnership marketplace and management platform for live event organizers.
Who is this for? Race directors and event organizers who are interested in generating increased revenue from their races with effective and sustainable sponsor partnerships.
Registration is free – see https://ustrailrunningconference.com/webinar-series/ for more details.

For details on the US Trail Running Conference and the webinar series, go to https://ustrailrunningconference.com/webinar-series/